The long awaited return of a women’s edition of the Tour begins on the final day for the men’s edition, Sunday 24th July, with stage one beginning at the Champs-Élysées in Paris. The cyclists will ride 8 stages which spans a total of 1029km (640mi), with the climbing increasing through the stages.

So why is a Tour de France Femmes avec Zwift so significant?

There have been various iterations of a women’s Tour through the years, though none have been able to survive. The longest lasting version of this was held between 1984 and 1989, and was held simultaneously with the men’s, sharing much of the route, although in shortened versions.

Most recently there have been single-stage events, but a comparable event to the men’s edition, which is often seen as the pinnacle of professional men’s cycling, was still missing.

As women’s sport has steadily been growing on the world’s stage in both popularity and funding, we are excited to see the addition of an 8-stage Tour including multiple mountain stages for a total of 1029km worth of riding, over 8 consecutive days.

Starting off with a flat stage, the riders will begin the Tour with 82km of riding, looping around Paris. There are two sprint finish points along the stage and one category four climb. The opening stage will be a battle between the sprinters to be awarded the Yellow Jersey, and will likely see the contenders for the overall General Classification (GC) sit back and avoid any potential crashes.

Another flat stage, with just one category 4 climb near the beginning of the stage, we could see an exciting start as those looking to take the Polka Dot Jersey battle it out early on. It is again unlikely that the GC contenders will make any big moves on this stage.

Some hills begin to make their appearance in stage 3, with a handful of climbs throughout. And handfuls of small hills mean there is potential for some attacks during this stage.

With some steep, “white road” climbs (white roads are unpaved, vineyard roads) stage 4 is looking like an interesting day of riding. Unpaved roads increase the potential for bad luck in the form of punctures and crashes, potentially ruining GC contenders' hopes.

This will be the longest day of the Tour, and after the possible challenges from the white roads the day before, with the mountain stages still lying ahead, the riders may be feeling the pressure. The stage ends with a sprint finish.

With four classified climbs, the final one up the Côte de Boersch, just 9km (5.6mi) from the finish, with an average of 6.1% gradient over 1.3km (0.8mi), we will likely see breakaways during this stage.

The final stage is by no means an easy one. There are some sprinter’s points up for grabs in the early part of the stage, before the peloton heads up the mountains. The Tour will conclude with a huge climb up La Super Planches des Belles Filles, which has an average gradient of 8.7% over 7km (4.3mi). The final gravelled section just before the summit finish line is a whopping 24% gradient, no easy feat on the 8th day straight of riding! 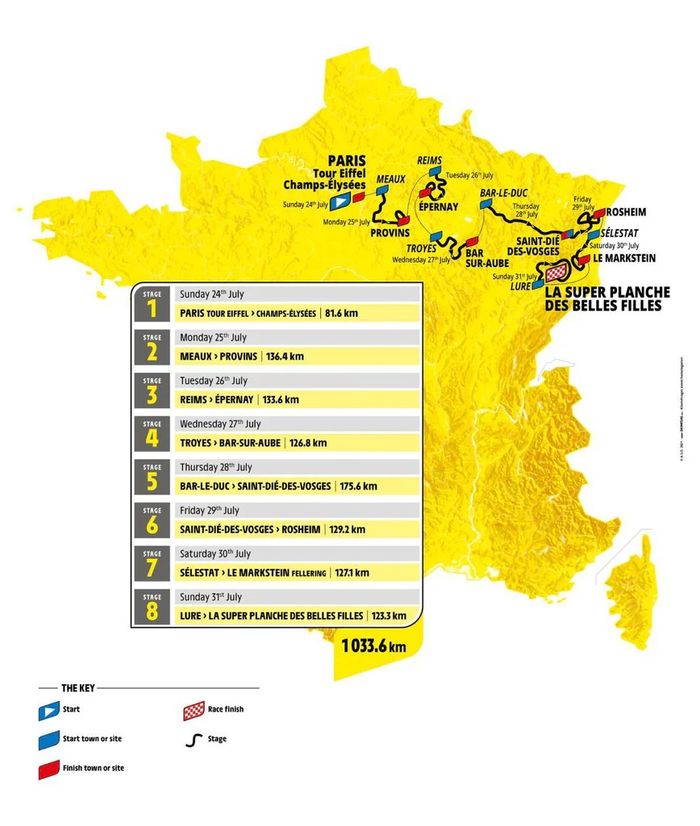 Riders To Look Out For

The hot favourite to be awarded the General Classification, Yellow Jersey, is Annemiek van Vlueten. She’s a three-time World Champion, two-time winner of the Giro Rosa, and winner of the 2022 Giro d'Italia Donne. Van Vlueten performs well on mountain stages, and is supported by team Movistar, which includes Australian rider Sarah Gigante, another exceptional climber.

Demi Vollering of team SD Worx won La Course in 2021 (one of the single-stage variations prior to the Tour de France Femmes), however isn’t typically one of the strongest mountain climbers, so the final stages of the Tour Femmes may prove too much for Vollering to claim the Yellow Jersey.

Marianne Vos will also be looking to claim the inaugural Yellow Jersey, but she is another rider that may struggle with some of the tough mountain climbs. If Vos does not pursue the GC, we will likely see her take as many stage wins as she possibly can.

Other riders who could potentially be in the running for the Yellow Jersey include Ashleigh Moorman, Niamh Fisher-Black, Elisa Longo Borghini, Cecilie Uttrup Ludwig, Kasia Niewiadoma, and Mavi Garcia.

Lorena Wiebes of Team DSM already has 10 professional peloton wins under her belt at just age 22, and with a strong team she will be a favourite to lead the Green Jersey.

Emma Norsgaard from Movistar performed well at the Giro Rosa in 2021, taking a stage win and could be a real contender for the Green Jersey, however being in team Movistar with Annemiek van Vlueten, may mean resources are focused on getting van Vlueten the Yellow Jersey.

Coryn Labecki, Marta Bastianelli, Elisa Balsamo, Alice Barnes, Susanne Anderson are some other riders to look out for at the sprint finishes.

The Polka Dot Jersey / Queen Of The Mountain

Annemiek van Vlueten is the favourite for Polka Dot Jersey as well as the Yellow, but Elisa Longo Borghini is another big contender given her power on the climbs. Ashleigh Moolman, Niamh Fisher-Black and Cecilie Uttrup Ludwig will also be in with a chance of taking the Queen of the Mountain classification.

With some really exciting stages and tough climbs, we can’t wait to see how the Tour de France Femmes avec Zwift plays out in 2022, and how the women’s Tour develops over the years to come.