Dreaming of a Motorcycle Adventure, We go 1-on-1 with Adrenaline Addicts

Travel has hit a big bump in the road lately and the lack of exploring has got us into some heavy daydreaming about our next adventure.

So while we’re confined to our homes in Australia, we thought it would be a good time to catch up with, and live through, some friends of ours who take people on motorcycle adventures for a living. Adrenaline Addicts was founded in 2016 by Sam and Christian, keen travellers who had fallen in love with Santa Marta, Colombia. The duo were shortly joined by Brayden and the three have been running motorcycle adventure tours throughout Colombia ever since. 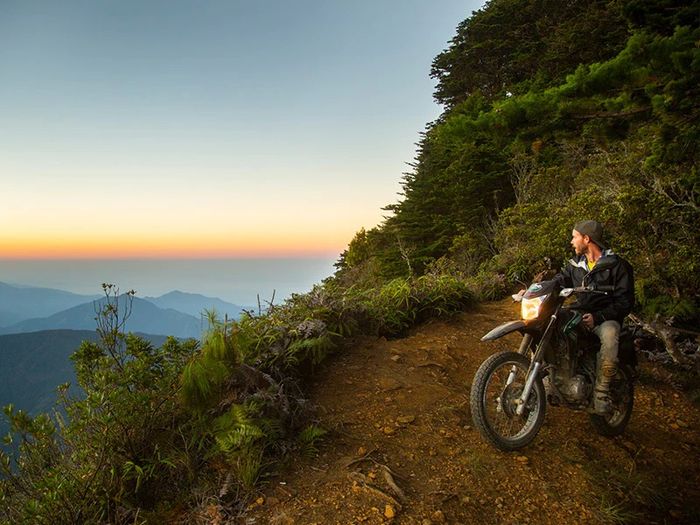 Thanks for catching up guys, how is life in Colombia at the moment?

Life in Santa Marta, Colombia has more or less returned to its regular, tranquilo, Caribbean pace after a pretty lengthy lockdown throughout 2020. Right now we are in the transition between the wet and dry season, so the cityscape and surrounding mountains and jungle are bursting into color again following the first couple weeks of rainfall, and makes for some awesome, dirty, fun thrashing around on the trails throughout our coastal mountain range.

I understand you didn’t have intentions of running a tour business in South America growing up. When was the moment that you knew Adrenaline Addicts was something you were going to pursue full-time?

We started in 2015 by testing the waters with half a dozen cheap rental bikes; only initially believing we’d be here for a couple of years, but by our third month of business we were turning down dozens of people every single day, so by the time Brayden was looking to join the business, we knew we had something special and that we would be in it for the long haul. 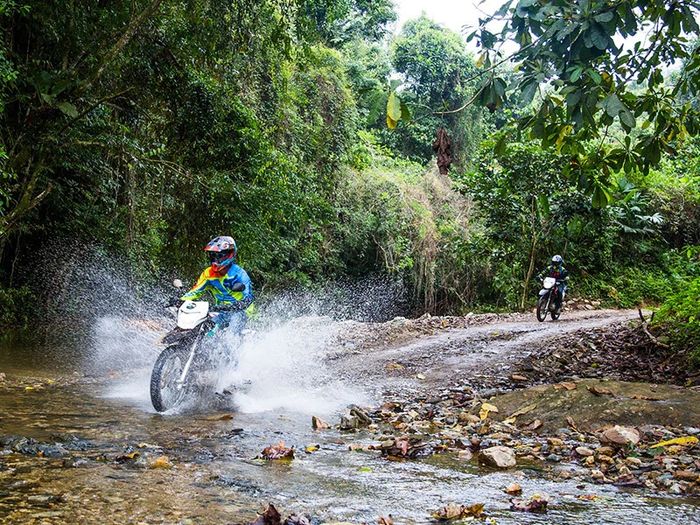 Did you all grow up riding motorbikes? And what was your first bike?

All three of us grew up riding motorcycles. Sam and Brayden had mostly street experience, while Christian rode almost exclusively on the dirt, so over the years we have been able to teach (and push) each other to get better at both styles of riding. Sam’s first bike was a Yamaha YZF600, Brayden’s was a Honda CBF250, and Christian’s was a little 50cc chinese dirt bike he can’t remember the name of.

Starting any business isn’t easy, let alone in another country. What challenges did you guys have starting out?

Oh man, is there a word limit on this? I guess the obvious one is the language barrier. We all spoke some very basic Spanish when arriving in Colombia, but we had to get a lot better very quickly so as to avoid being taken for a ride over prices, as well as to understand all the complicated bureaucratic processes involved with setting up a legally operating company. The other part was finding employees and local businesses that we could a) trust not to overcharge us, and b) that pay enough attention to the details and provide a service of a high enough quality to reach our standards (and the standards of our international clients). Our current mechanic for example is the seventh that we have tried working with, but with any luck he’ll be the last, as he is amazing and has been with us for over two years without an issue.

What impact has COVID had on your business?

It’s had an enormous impact- there’s no way to sugar coat it. Our main clientele are primarily Europeans, North Americans and Australians on short (2-3 week) vacations, and almost every country in those areas currently requires a lengthy quarantine after returning home from Colombia, or straight up doesn’t allow its citizens to leave in the first place. That being said, Colombian borders are currently completely open to the world, without any restrictions or extra requirements about tests or vaccinations, and although we have mixed feelings about that being the best thing to do for the health of the Colombia people, it has helped us keep our heads above water so-to-speak as a handful of clients are still traveling down from the USA.

What types of motorcycles are in the fleet?

We have four models of motorcycles, all of them Hondas. The 110cc Navi (automatic), the CB110cc (street), the XR150L (enduro) and the XRE300 (light touring). We have also been looking at getting some KTM390 Adventure bikes, or the new Kawasaki KLR650 when it arrives in Colombia, but we have to see what the next twelve months bring before pulling the trigger on those. 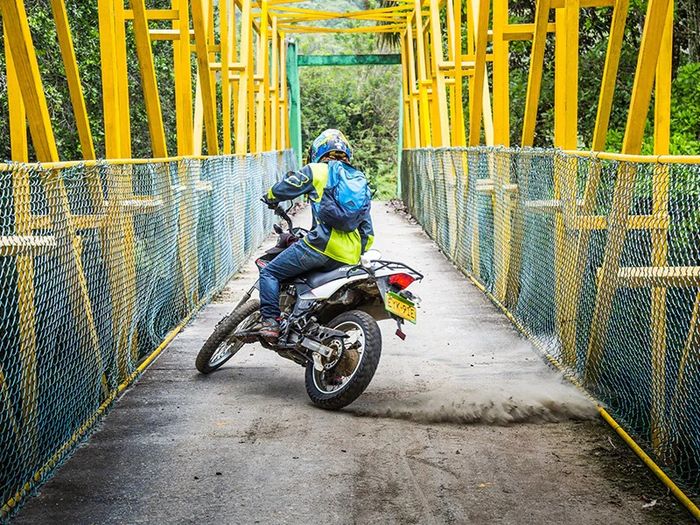 The beauty of taking tours is the people you meet along the way. Any memorable characters that stick with you?

Oh man, so many. One of the best things about working in tourism is that your customers are almost always in a great mood as they’re on vacation away from the stresses of normal life, so they can really be themselves and usually are a lot of fun to be around. In general, older Germans and young Dutch guys are some of the most fun groups we have had. For some reason we have had several groups of 55+ year old German men who absolutely rip on the off road sections and love to party after the day’s riding. We also work closely with a few dutch tour companies that organize university reunion trips and bachelor parties, so they are always really, really fun ones for the guides to lead.

What is your favourite place to take people in Colombia?

I’m going to say it’s a tie between the desert of Punta Gallinas (northernmost point of mainland South America), and the jungle-mountain of Cerro Kennedy (highest accessible point in the Sierra Nevada mountains). Both of them have out-of-this-world scenery and require hours of intermediate-advanced enduro riding through hugely varied terrain to reach them so you really feel like you’re on a true adventure. I’ll also give an honourable mention to Cayena Beach Resort, which is the most amazing lodging set right on the beach, and one we always spend a rest day at on our longer tours after spending several days slugging it out in the remote La Guajira desert. 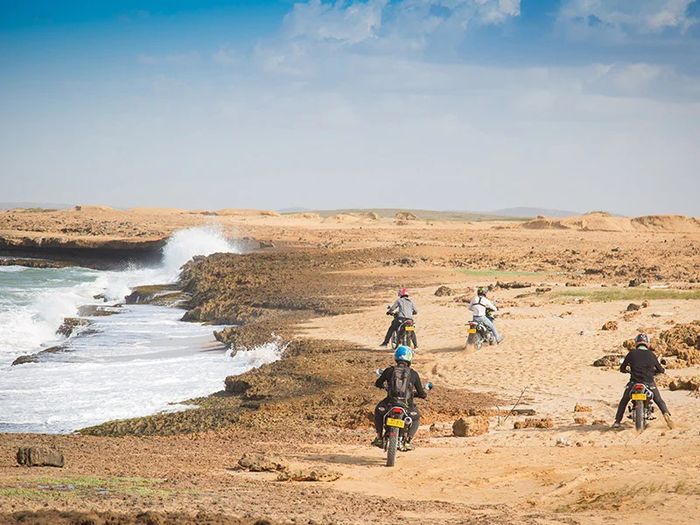 If you could choose any three people in the world to take on a tour of Colombia, who would it be and why?

OK we’re going with a mixed bag here. Travis Pastrana is number 1, because the guy charges and pushes the limits like no other and it would be like having our own personal masterclass watching him ride through the Colombian desert. Number two is Jack Black, purely because he’s absolutely hilarious and seems like a great dude to hang out with. Number three would be Ewan McGregor (and Charley Boorman if you’ll let us bring a fourth) because we’re hugely appreciative of the work they’ve done to bring overland motorcycle touring more into the mainstream with The Long Way Up/Round/Down, especially with the Long Way Up as it brought the focus over to the South American continent!

Thanks for your time. Hopefully we can get over to Colombia soon and you can take us on a tour!

Cheers guys, we really appreciate you giving us this opportunity to have our voices heard at a time where the international tourism industry is really struggling, and of course for making such a killer product that our guides now refuse to leave on tour without!