If you're in the market for your own vintage motorcycle, it's important you know your history. It will help you define the difference between a Cafe Racer, Scrambler, Brat, Tracker and more.

Vintage motorbikes are, for good reason, all the rage at the moment. If you ask any true rider, the joy of a motorbike isn't simply limited to the ride, it's also the endless hours spent in the garage or driveway working on the metal baby.

But the resurgence of these motorcycle styles means that these days, you can even buy "vintage bikes" off-the-shelf. Just look at the Ducati Scrambler and Triumph Bonneville Bobber.

Determining the difference between the abundance of vintage bikes is not easy and as time goes on, the lines become blurred. It takes a trained eye to spot the difference. So let's help you know your vintage motorcycles by pointing our some little (but key) differences and giving you a quick history of these beautiful machines. 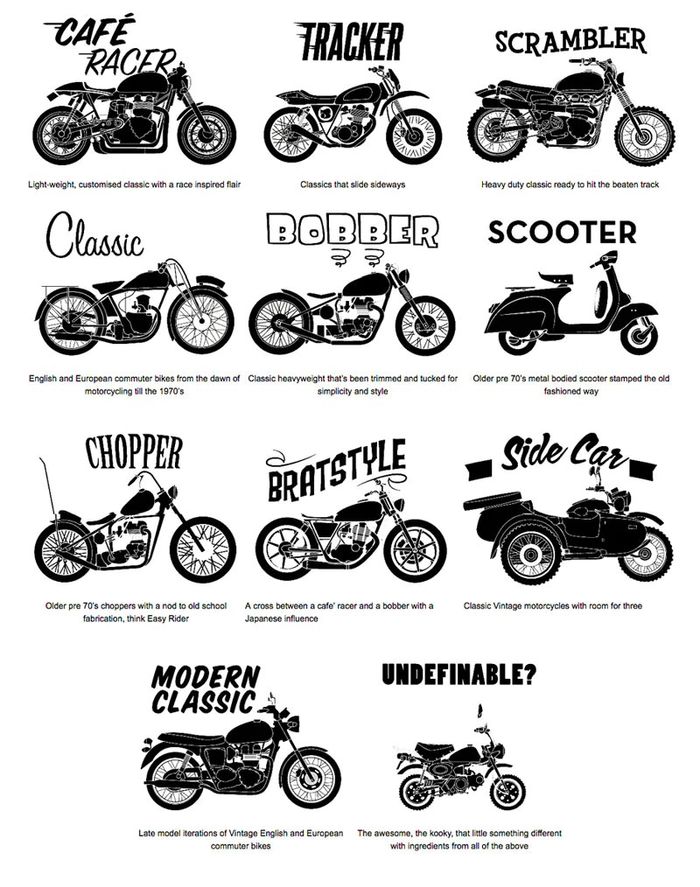 From the above image, you'll see that the key difference between a Cafe Racer and a Scrambler is the position of the exhausts.

The term 'Cafe Racer' originated in Post-War Britain in the 1960's, where the bikes were used by "rockers" as quick rides between hang-out cafes.

The origins of Scramblers are quite similar, but whereas Cafe Racers would take the standard road course from cafe to cafe, Scramblers took the fastest route between two points. Even if that meant driving through fields of thick grass and mud. This is why the exhausts sit higher, allowing the rider to transition easily from road to off-road. Think of them as the first dual-sport riders.

With the development of off-road bikes, Scramblers are more of a look than a purpose built bike nowadays and as you'll see from the pic below, they look pretty darn' good.

Now you know the difference between a Cafe Racer and a Scrambler, it's easier to determine a Tracker. Lighter than a Cafe Racer but not as durable as a Scrambler, the Tracker has a rich history that dates back to 1910. Think of a Tracker like the original dirt bike. The lighter frame enabled riders to slide sideways around tracks while maintaining speed. This is also why the exhausts sit high like a Scrambler.

Originally called a "bob-job", Bobbers were a custom motorcycle, which involved stripping back the unnecessary (in the opinion of the rider) parts and components to lighten the motorcycle.

If you look at the above image, you'll see that the Bobber is a similar shape to the Classic, just stripped back. Reducing the fenders and other components of the bike.

If you didn't think the lines were blurred by now, this is where it gets really tricky. Brats originated in Japan and are in short, a trimmed down version of the Cafe Racer. Think of it like a cross between a Cafe Racer and a Bobber. They're generally dark, low, mean and cheap.

The name comes from the Tokyo shop that started it all, Go Takamine's Brat Style. Is there any higher honour than having your design become a style's name?

Many of the vintage bikes you'll find these days are modern classics. Adaptions of the early years when these bikes were finding their feet (wheels). Slightly more rounded for aerodynamics, these bikes also focus on certain practicalities such as a longer seat for secondary riders, front and rear fenders and a larger front light. They're still beautiful bikes, combining various elements from all the other vintage bikes to give that classic motorcycle look.